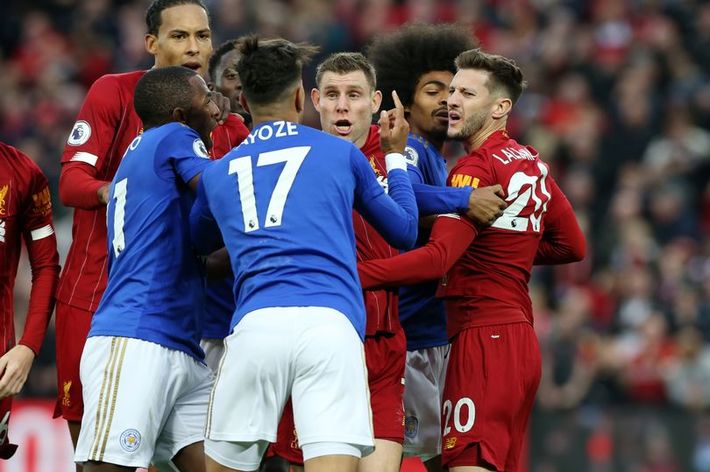 Adam Lallana was only on the pitch for about three minutes against Leicester City but the trail of anarchy he left in his wake during that time is quite remarkable, as Liverpool.com explained...

Adam Lallana may only have entered the contest in the 92nd minute, shortly before Sadio Mané was awarded a penalty after being felled in the box by Marc Albrighton, but the 31-year-old midfielder made certain to stamp his mark on the game.

As soon as James Milner coolly stroked the penalty past Kasper Schmeichel to seal the three points for Liverpool, Lallana broke into a high-intensity sprint to collect the ball ahead of the Danish stopper, in an attempt to prevent the Foxes from taking a swift kick-off.

Schmeichel, though, unsurprisingly managed to wrestle the ball off Lallana with relative ease, in a physical contest akin to a Great Dane taking on an excitable miniature Schnauzer puppy. Lallana, though, was unperterbed. He had come on the pitch seemingly with the sole intention of seeking a scrap, and oh boy did he pursue it.

After having the ball snatched from his grasp, rather than walk away, Lallana proceeded to launch himself at full pelt into Jonny Evans, Leicester's 6ft 2in centre-back, but not satisfied with his first shoulder barge, he went back for seconds and aimed another sly dig in the back of the Northern Irishman.

Next up in Lallana's incessant quest for aggro was the Turkish defender, Çağlar Söyüncü, who had clearly had enough and shoved him away with a considerable degree of force, prompting Fabinho to depart from Liverpool's celebrations and diffuse the situation.

Round one, complete. But oh no, Lallana wasn't finished just yet...

At full-time, Andy Robertson gave Ayoze Perez a slight elbow to the ribs on his way to celebrate with Lallana and Virgil van Dijk, only for the Spaniard to retaliate with a heavy shove in the Scotsman's back.

Lallana, of course, was licking his lips at the opportunity to get involved in yet another physical confrontation, pouncing immediately onto the scene to protect his team mate.

All of a sudden, Perez found himself surrounded by Van Dijk, Milner, Robertson and Lallana, forced to retreat after picking a fight he probably instantly regretted (although he still had time to style his hair mid-way through the scuffle).

It was hardly out of character for Lallana, given he was once sent off for throttling an opposition player while playing for the U23s against Tottenham Hotspur after being on the receiving end of several heavy tackles, although this latest exhibition of Lallana's fiery streak was considerably less violent than that unsavoury incident.

And while Lallana has barely featured so far this season, he certainly doesn't lack commitment to the cause on this evidence – even if there is an amusing, teenage pettiness to his determination to seek out conflict in situations such as these.

The thing about this Liverpool side is that while they play some beautiful football and aren't renowned for being particularly aggressive, they can be a gnarly gang of ba***rds when they want to.